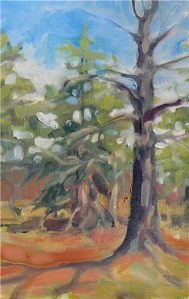 I spent far too long picking at this painting, frustrated by the self–imposed limited palette consisting of titanium white, cadmium yellow pale, alizarin crimson and ultramarine blue.  My old bad habits continued to attack the new habits I’ve been working so hard to develop.  Instead of mixing the pure pigments before adding white, I found myself adding the pigments to a blob of white on my palette, killing the color intensity I might have had.  I should have stuck to my limit of painting no more than one hour en plein air.  The light changes too drastically over a two hour period.  Beginning at noon was not optimal.  Regardless of difficulties I was delighted to finally be painting outdoors again. 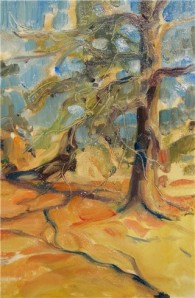 My second attempt was more direct and simplified.  I stopped before getting picky.  I used the same limited palette as the first painting.  I think I will stick with one yellow, one red and one blue for awhile, changing the selection of those primaries and remembering to mix the pure pigments before adding white.

The biggest challenge was mixing a nice dark without it either being too purple or losing its darkness by adding yellow to temper the purple.  The addition of viridian to the palette would have been helpful to make a greater variety of darks that would allow for purples as well as browns without going to mud.

This site uses Akismet to reduce spam. Learn how your comment data is processed.